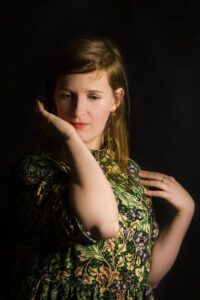 Dutch lyric coloratura soprano Elvire Beekhuizen graduated from the Royal Conservatory in The Hague in 2012. She was a prize winner of the Prinses Christina Competition, semi-finalist in the Belvedere competition and finalist in the Gebrüder Graun Wettbewerb. Since then she has been increasingly in demand in the opera and oratorio scene for the incomparable agility and flexibility of her voice and unique stage personality. Her operatic experience includes some of the most demanding roles such as Morgana in Handel’s Alcina, Pamina in Mozart’s Die Zauberflöte, Amaranta in Haydn’s La Fedelta Premiata, Erasto in Lotti’s Giove in Argo, Emmeline and Philidel in Purcell’s King Arthur and Princesse Fantasia in Offenbach’s Le Voyage dans La Lune.

Elvire is regularly invited to perform with Baroque ensembles and opera companies in Europe such as Apollo Ensemble, Dutch National Opera, Opera2day, BarokOpera Amsterdam, Lausitzer Barockensemble and Ribattuta Musica. With the Apollo Ensemble she has recorded several well-known repertoire pieces, such as the John’s Passion, the Matthew Passion and Messiah, but also lesser known pieces such as the different version of the Brockes Passion, set on music by Handel and Telemann amongst others. She has worked with some of the best conductors and stage directors such as José Darío Innella, David Rabinovich, Andreas Küppers, Nynke van den Bergh, Vaughan Schlepp, Frédérique Chauvet and Sybrand van der Werf.

Elvire has a big curiosity towards the people around her and she is enthusiastic about artistic and personal development in general. At the Handel Opera Academy she will be around as a vocal coach, stage coach and a confidant if needed.

We use cookies on our website to give you the most relevant experience by remembering your preferences and repeat visits. By clicking “Accept All”, you consent to the use of ALL the cookies. However, you may visit "Cookie Settings" to provide a controlled consent.
Cookie SettingsAccept All
Manage consent

This website uses cookies to improve your experience while you navigate through the website. Out of these, the cookies that are categorized as necessary are stored on your browser as they are essential for the working of basic functionalities of the website. We also use third-party cookies that help us analyze and understand how you use this website. These cookies will be stored in your browser only with your consent. You also have the option to opt-out of these cookies. But opting out of some of these cookies may affect your browsing experience.
Necessary Always Enabled
Necessary cookies are absolutely essential for the website to function properly. These cookies ensure basic functionalities and security features of the website, anonymously.
Functional
Functional cookies help to perform certain functionalities like sharing the content of the website on social media platforms, collect feedbacks, and other third-party features.
Performance
Performance cookies are used to understand and analyze the key performance indexes of the website which helps in delivering a better user experience for the visitors.
Analytics
Analytical cookies are used to understand how visitors interact with the website. These cookies help provide information on metrics the number of visitors, bounce rate, traffic source, etc.
Advertisement
Advertisement cookies are used to provide visitors with relevant ads and marketing campaigns. These cookies track visitors across websites and collect information to provide customized ads.
Others
Other uncategorized cookies are those that are being analyzed and have not been classified into a category as yet.
SAVE & ACCEPT